👊🏽 Special Edition: I invested in Around and you can join the Around family too!

​​​This is a special edition of Lolita's Newsletter, a bi-weekly newsletter of curated actionable insights and resources for underestimated founders, funders, and friends. 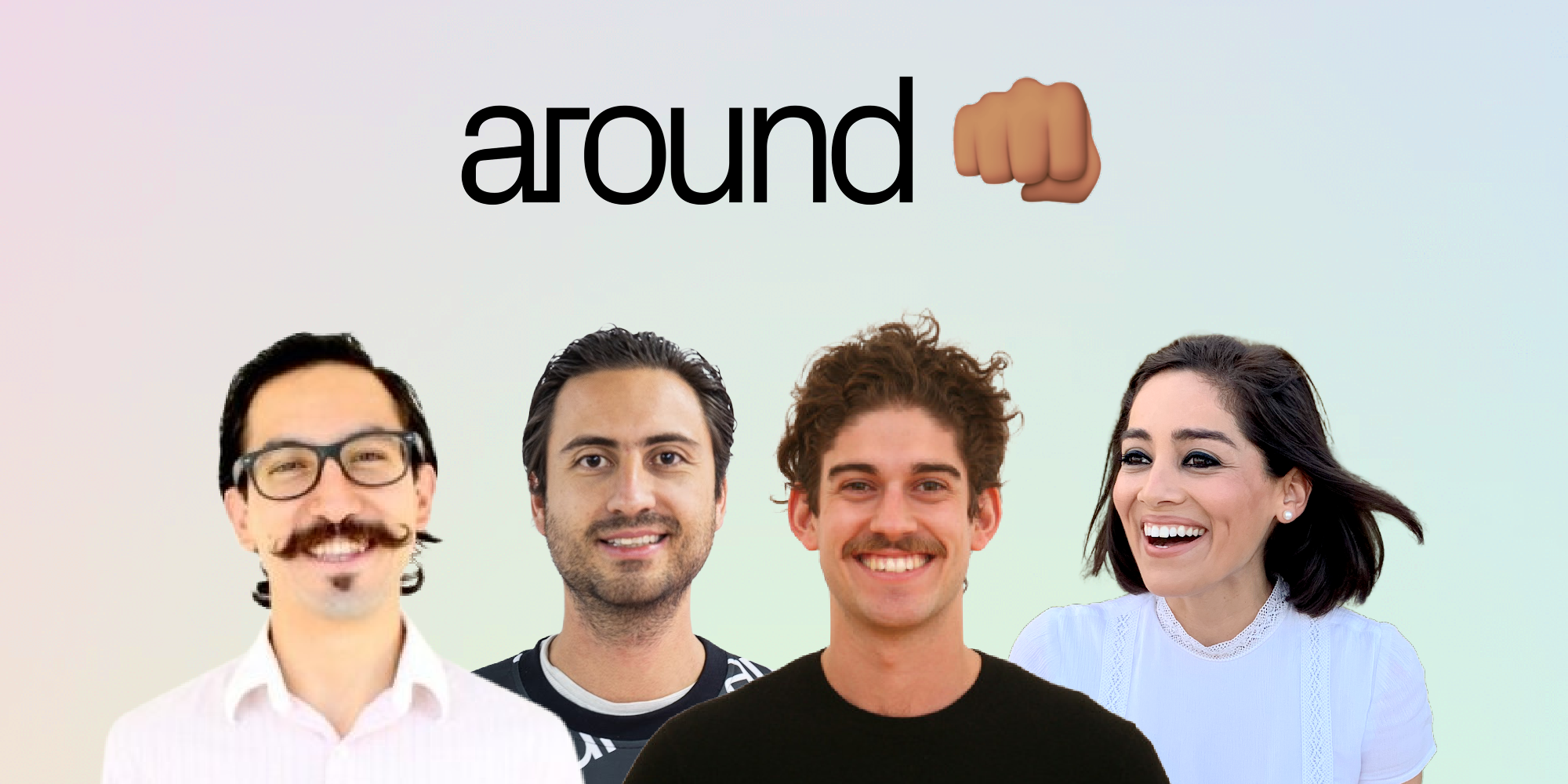 ​ Alfonso Tinoco, Gerardo Vallarta, and Martín Haiek (Around) and me

​Hi all! I’m so excited to share with you that Ganas Ventures and I joined the Around family and so can you! More on that below. 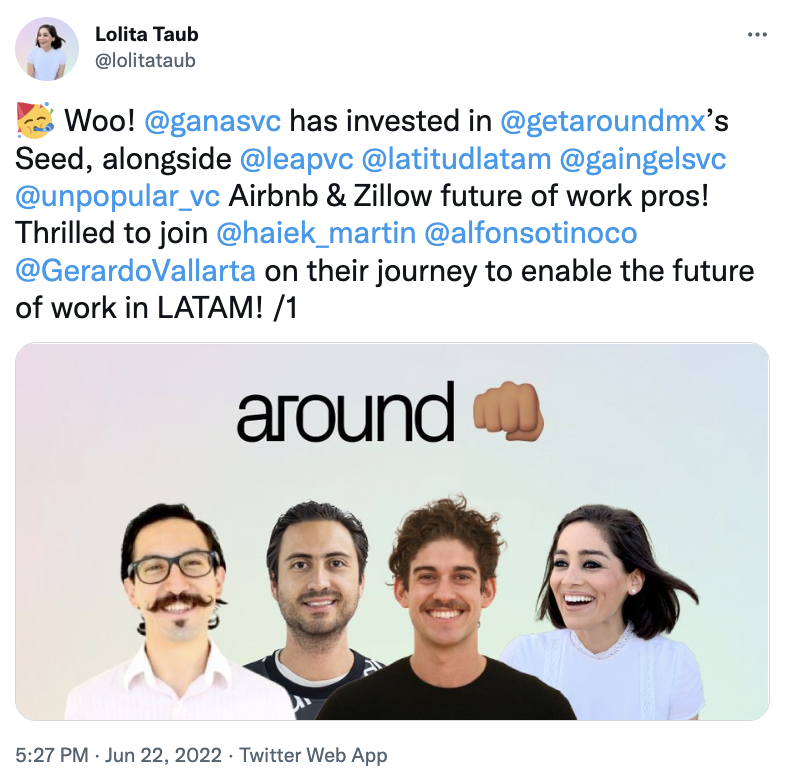 ​On March 8th, Ganas Ventures launched with a thesis to invest in Web 2 and Web 3 community-driven startups in the US and Latin America! We invested in Latitud and now we’re thrilled to announce Ganas’s second investment in LATAM’s Around, alongside Leap Ventures, Latitud, Gaingels, Unpopular VC, Sequoia scout fund, Jonathan McNulty, former VP of product at Trulia and Zillow and VivaReal advisor, Lucas Vargas, former CEO at VivaReal, and more prop tech trailblazers! 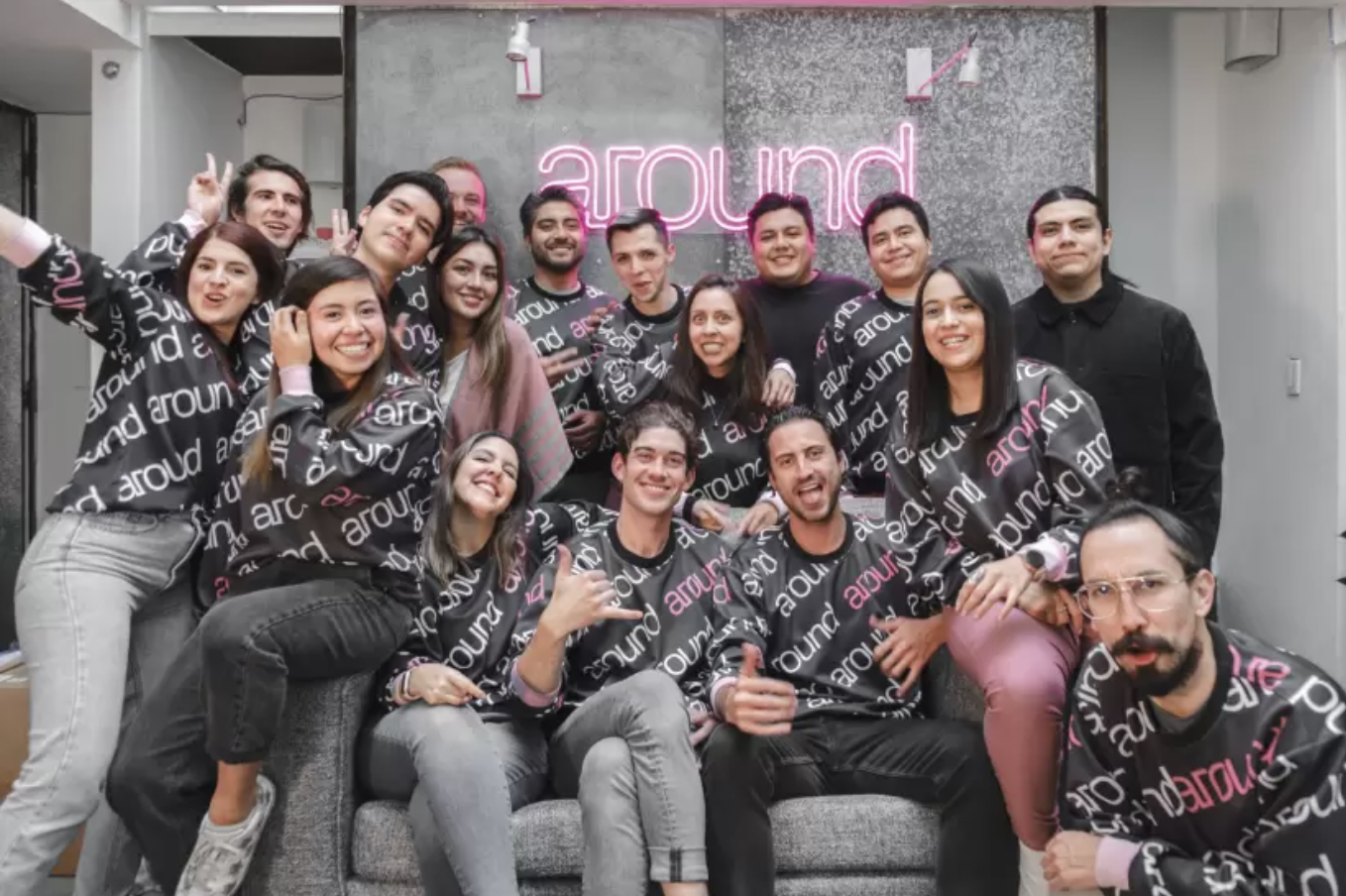 ​There’s a lot to love about Around. They…

​Around. Around is a proptech company that brings companies to the future of work. Through their platform, companies can find alternative furnished and serviced workspaces under flexible terms and attuned to culture needs.

​Team. Before launching Around, the LATAM startup-superconnector-founders worked together for +6 yrs w/over +150 cos at Startupbootcamp. That’s where Martin Haiek (2x LATAM entrepreneur), Alfonso Tinoco Moreno (startup ops pro), and José Gerardo Vallarta Ortega (growth-hacker) identified the need for future of hybrid workspaces. They recruited proptech pros from VC backed startups, and launched in Mexico (hottest Spanish-speaking LATAM tech hub). For example, Julio Florido, first engineer and former CTO from TrueHome, joined Around after leaving TrueHome and brought an excellent team of developers with him to Around.

​Traction. Since their launch in 2021, they’ve managed to build a $2.5M ARR co, are servicing +100 customers - like Monashees, Tribal, Palenca and Tractian - and it’s rapidly growing. Bonus: they are passionate and kind people unlocking untapped alternative workspaces in the region in community.

​Market. Today, in Latin America, there are 4.5 million companies that fall into Around’s initial target segment; and, on average, these companies spend $10K annually on office space. That adds up to a +$40B annual market that’s growing because, according to JLL, by 2030 30% of all office space will be hybrid workspaces - today it’s just 3%. Riding this wave, Around is and will continue to enable the future of work, hybrid work, in LATAM. Today, they’re starting in Mexico, the largest Spanish-speaking tech and startup hub in all of LATAM and top destination market for expansion processes within the region.

​Catalyzing the future of work. Hybrid work is the future and Around is proving it. Around’s sweet spot is providing a platform to find hybrid workspaces for companies that 1) don’t know how much workspace they need, 2) provide their talent a place to work outside of their home, and 3) want flexible and serviced workspaces for one rate.

​“Companies want to remain as flexible as possible, but they know they need an office space for certain teams to get work done. Companies like Airbnb or Uber going remote are great examples to prove our point. They will always need a main office location in each city they are operating. But this office location will not be huge HQs, as they used to be, they’ll have the form of smaller fully private office locations, just like what Around is offering. This was the case with Uber Mexico, when the VP of Uber Eats LatAm booked an Around space for his team on a monthly subscription. Moreover, we’re seeing teams growing in multiple cities at the same time as opposed to a geographically centralized fashion. We’re able to provide them with move-in ready private options in all those cities. This is the case with Houm - a Chilean startup that joined Around with a 20 person office in Mexico City and today they have larger offices across 4 cities in the country.” - Martin Haiek

​Community-driven. The magic of Around is that they’re tapping into a community of dead office space and alternative workspace hosts and enabling them to build their businesses around a gap in the market: those serving the companies who know hybrid is the future like Airbnb and Uber.

​Roadmap. Around plans to expand throughout LATAM and reach $10M in ARR this year! To keep their edge, they’re leaning on community-led growth and data-driven tech that enables Around to grow with their customers.

​😇🚀 You can also join the Around family.

​You better bet I’m excited to have joined the Around family and, now, so can you!

​Join the Around family as a host or customer at Around.to and become an investor as a Ganas LP. 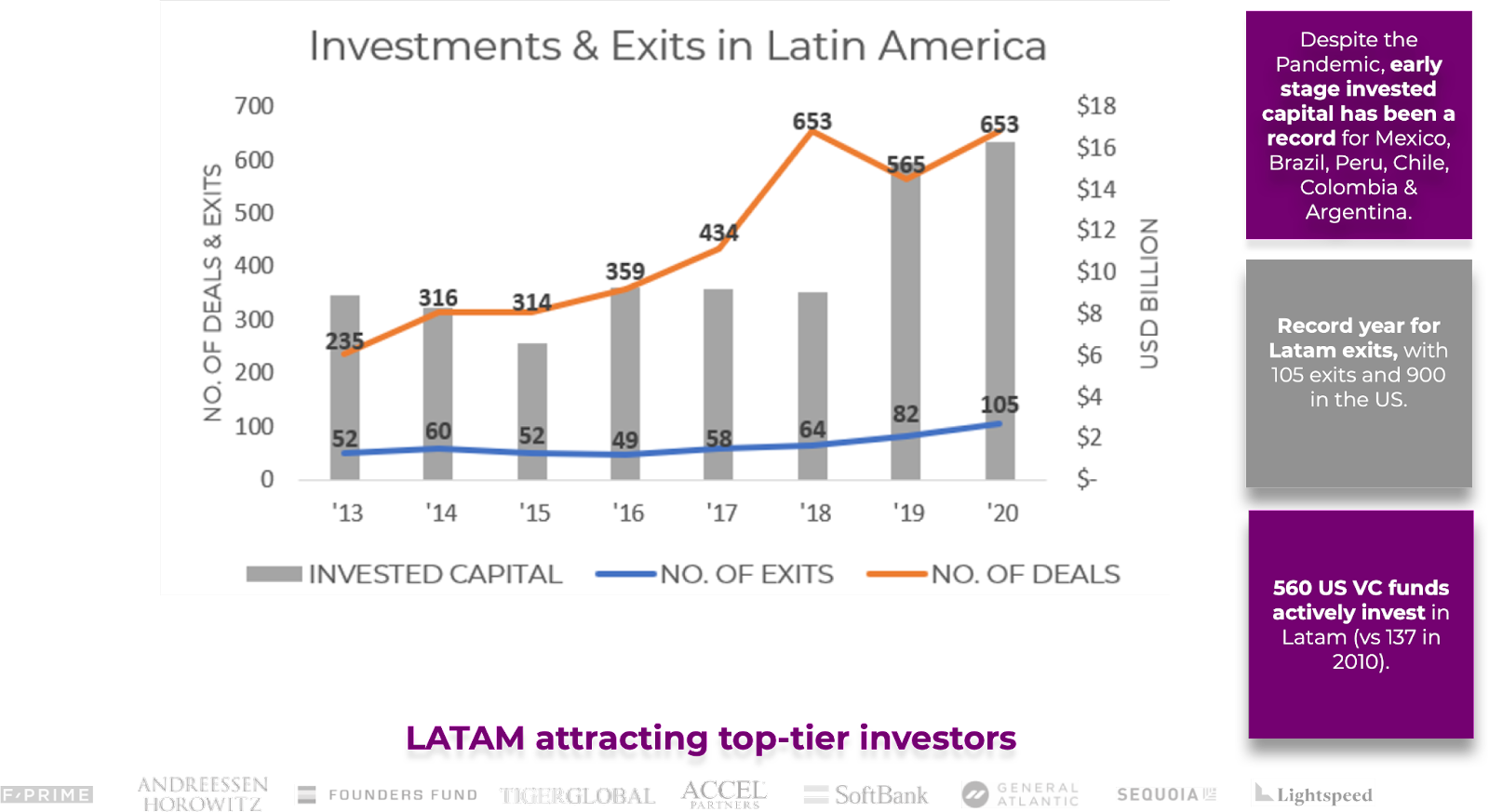 ​​​Disclaimer: Ganas Ventures is a 506c fund that allows us to publicly solicit for our raise. All are welcome to apply to become an LP; however commitments into Ganas Ventures will only be accepted from accredited investors.