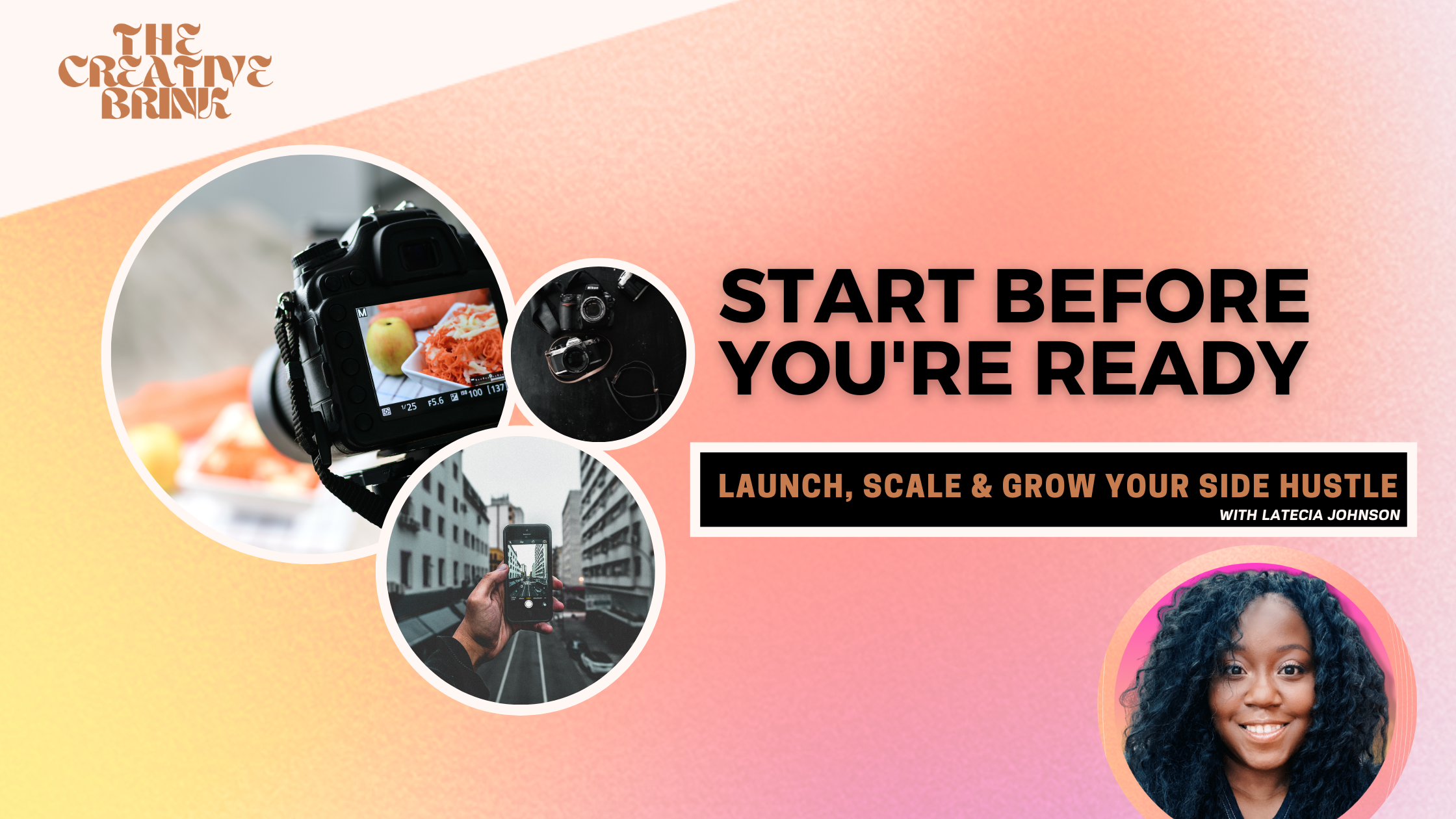 ​The Visionary Rising team and I celebrated a huge milestone last week: our six-year anniversary!  I shared how excited I was in the last newsletter along with a few of the lessons I’ve learned along the way that I wished I had known sooner.  For the next few weeks, I'm going to spend time breaking down the tips I've learned through starting the agency and scaling it to 7-figures. So far, I've shared key steps on how to Bootstrap Your Studio and today I'm breaking down the importance of starting where you are. So, let's dive in.

​Art within the artistry

​There is an art to the side hustle.  What’s an even greater art is turning that side hustle into something that will replace your full-time income and create consistency so that you can hire other people.  My agency has seen many iterations from solo-led side hustle with a niche focus on creators (B2C) to a full-scale agency with a broad focus on brands(B2B), and now a hybrid model that focuses on both creators and brands with a niche focus (the creator economy).

​I’ve had to get comfortable with pivoting and making the call when there isn’t a lot to go on. That isn’t something that just comes along, it’s built up over time; over a tiny million decisions you make that turn out to be exactly what you should have done.

​ How long did it take me to build up this muscle? Seven years.

​ That is how long I sat with the idea of Visionary Rising before launching it.

​… of talking myself out of taking the leap.

​ Until I could not compromise anymore.

​ What was I doing instead?

Working full-time roles, moonlighting as a freelancer, burning the candle at both ends, and dreaming of the day I would be able to put all my efforts into creating.

​Instead, I chose the ‘safest’ route: a secure job, first at a top 100 technology firm, then at a retail agency, as a Digital Strategist.

​I was comfortable, but I wasn’t fulfilled.

​Then, one day out of nowhere, my biggest fear happened: I was asked to choose between continuing to take on side projects or accepting a promotion.  I looked down the barrel of the next ten years and knew that I probably would not like the life I built if I accepted the promotion.

​ I chose to take a new path and launched the agency 2 weeks later.

​Entrepreneurship is not for the faint of heart. It takes commitment, discipline, and an almost delusional belief in oneself to think that you’ll succeed where others have failed; to know the statistics and willing choose that path.  Jump in anyway.

​ If I had overthought starting a business back then, I probably would not have done it; but looking back now – it is the only step that made sense.

​Here’s the 3-step process I followed when making the decision on whether to launch a business or look for a job; it’s also a process I use when faced with a decision on where to take the agency next.

​Before you can make any decision, you must understand where the holes are in your current process.  For me, I understood that the job I left was a comfortable one, but no longer challenged on fulfilled me.  Coming to that conclusion helped me to better understand that I needed a challenge in whatever I took on next.

​It seems simple enough, but something a lot of people miss out on.  Creating a plan with milestones associated also forces you to make a commitment to see the thing through.  As a I shared earlier, the time between making the decision to launch and launching was only 2-weeks because I followed the plan I’d laid out.

​The plan I created was a small one: buy a domain, create a name, and reach out to a few potential clients…

​It was enough to get me focused and focused output equates to accomplished goals every day.

​Launching on a 2-week timetable meant that I had to understand that everything was not going to be perfect. This was a struggle because I’m a perfectionist, but once the site launched, I realized that the little things I saw as mistakes weren’t even noticed by anyone else and a very beautiful thing about launching before you’re perfect is that you get the opportunity to constantly iterate.   This lesson is something I’ve shared with my team time and time again – perfection is great, but often, your biggest areas for growth exist in the mistakes.  Allow yourself room to grow.

​As you start to exercise the muscles above, you’ll start to see something else emerging: an unfuckwithable air of greatness that permeates across yourself and eventually your team.

​In conclusion, f you’re feeling stuck and are debating whether to make a change, follow the steps above. As you start to exercise the muscles above, you’ll start to see something else emerging: an unfuckwithable air of greatness that permeates across yourself and eventually your team. They will help you to determine whether taking the leap into entrepreneurship is the right decision for you. And if it is, they will become a roadmap for how to make the transition as smooth as possible.

​This process isn’t perfect, but it helps to set you on the path of action; I’ll take action over perfection any day of the week.

​See you again next week.

​​Whenever you're ready, there are 3 ways I can help you:

Want more? Follow @lateciarising and let me know how I can help you scale as a creator. Want to support this newsletter and get featured? Drop me a line & I’ll be happy to collaborate.